I used to blog on another platform. Check out what I shared in earlier years here.
You can add the HTML for the World Map here too.

Their mum explained that she was working for two weeks which is the whole holiday. As they were driving silently, they finally made it to their destination. Mia and Lucas got out of the car quietly and got out their suitcases sadley and went inside without saying a word to their mum instead of saying goodbye.

Their grandma welcomed them warmly and led them to their rooms. As they were walking around the house they found a little room that was locked, so they called their grandma and asked why the room was locked. Grandma said aggressively and nicely at the same time to never go into that one specific room, Mia and Lucas started to get suspicious but never thought of it again. UNTIL they heard a knock on the secret room but it was the first time they heard it so they ignored.

Last Friday on the 23rd of September, it was Mission Day. First we went to the Liturgy and then we all had to bring a coin and each class had to put it in front of  the prayer table. After the Liturgy we all went back to class to do our tests, my class did a Te reo – a thon, later on we had to turn in our papers to our teacher, Mr.Bell. Then the bell rang for morning tea, during morning tea we had to buy as much raffle tickets as we could so that our name would be the common name that the teachers will pull out after school.

Following that we went to class and watched a movie called, Spirited Away which was 2 hours long, we watched the movie while Mr.Bell was marking our tests. Half way into the movie the bell rang for lunch, so we ate our lunch, bought some more raffle tickets and went in our bubbles to play some games. After lunch we went inside to quickly finish the movie before we went back to the canopy to do the raffle tickets. Later on, we finished the movie and went to the canopy for the teachers to pull out 3 raffle tickets. After they give out the prizes for the names that were picked, did our prayers and went back home. 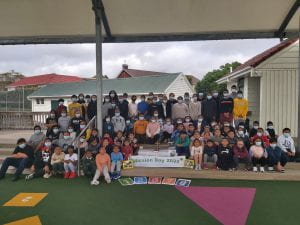 What are the Commonwealth Games?

What happened on the “ Road To Birmingham”?

Which Athlete did you choose/Why?

I chose Frances Davies, because I knew that she works hard and ecourges herself to reach her goal , which is very inspiring to me, it teaches me to never give up until I reach my goal.

I watched the games with my uncle because he is the only one in my family that has sky TV to watch sports. The first time I watched only my chosen athlete but then my uncle encouraged me to watch some more sports with

him so that I could discover more sports athletes.

I would like to do this again because it was so fun to find facts, and I would recommend this even if you are not sporty, because it will give you something to do instead of lying down on the couch being like a sack of potatoes. 😅

We can save endangered creations by looking after our world more, because the world is a gift from God full of wondrous adventures. We can start off by throwing rubbish instead of throwing it everywhere. We can also look after  animals like birds that are endangered because of pests.

Pests like possums, ferrets, feral cats and lots more that eat little bird eggs, kill animals and eat them which makes animals get extinct and that is very bad because god gifted us food, sheep using its fur to make clothes. We also need to stop cutting down healthy trees all the time because trees give us oxygen to breathe and birds use it to hide from their predators.

We hurt the environment by building more and more factories which makes more smoke then the smoke goes up into the atmosphere and damages the atmosphere and hurt the birds that flies by with the smoke and makes them dirty. Another reason why we shouldn’t throw rubbish everywhere is because the rubbish goes into the drains and the drain takes the rubbish to the sea, which means that the sea creatures would think that the plastic is food and eat it, then they choke and die which is very sad. 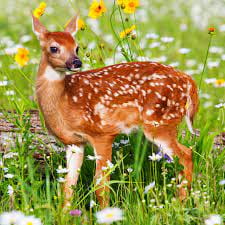 On Friday the 5th of August, we got the opportunity to go and learn about trees and pests, to protect the birds, trees, kiwis and ETC. In the morning we got to meet Chris,  Chris started to explain everything like how the traps work and how to use them.

After Chris explained everything we had a quick morning tea because the bus was waiting outside for us. When we got into the bus we had to wait for 20 min and then we made it to Cornwall park. It was so beautiful, relaxing and very fun to look at.

After taking a look at all the traps we all got some binoculars and tried to look for some birds. I saw a Fan Tail. It looked so beautiful and relaxed. After that we ate our lunch and played some games afterwards, then the bus arrived to pick us up. After another 20 min we  made it to school. We took a pest test and some of us got mixed up with all of the questions.

Later on we made our own tracking tunnels and some of us like me wanted to set our own outside. After that we went back home to rest. It was a really great experience.

I did a cybersmart activity called Ko wai au and all I had to do was to add a picture of myself and at the bottom there is a text box that has some facts about me like what my favourite subject is or what my favourite hobby is. 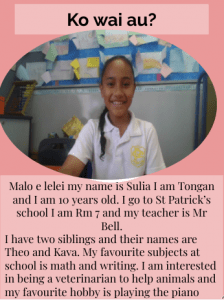 Today I did my cybersmart activity, I had to make fishes out of shapes. It was fun but a little hard to make because I kept on letting go of the cursor and I had to rotate the shapes a bit. I put some accessories on the fish to make it more creative . 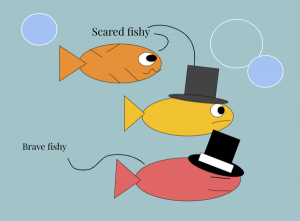 Last week on Monday we got an opportunity to do some engineering activities for one week. Epro8 is a company that lets kids like us know how to create and measure. First we read the introduction in the book and did the first activity which was to make a crane. We read the instruction and watched the video to see an example of how they built their crane. It took us two days to finish it and it turned out much more better then we thought it would. We used a measuring tape, aluminum, red and blue joiners to connect the aluminum together, bolts to keep the joiners steady, ropes that could be the hook and two screwdrivers. When we were done Mr Bell our teacher was the judge and tested all of them nobody lost but some of ours broke so we carried on with another which was a bridge. The bridge was more harder than it looked like, we had to make sure it was the right length and width. Making this bridge took us three or two days to make. After we made a bridge we took it outside to record what we have done but then realised we needed a car we rushed inside the classroom and saw tyres inside the box so we made a car and tested our bridge outside. It turned out that all our hard work paid off and our bridge did not break like the last one. Our last one was a caveman car it only took us two days again but this time we needed rubber bands to help push the car more. After we made our caveman car we all had a race, pur one wasn’t fast enough and later on the rubber band broke. My team wasn’t upset because we had an amazing time doing Epro8 and we hope that we could do it again.

Welcome to your brand new blog at Edublogs!

To get started, simply visit your blog’s dashboard, edit or delete this post and check out all the other options available to you.

We can walk you through step-by-step in our guide to getting started with your blog.

About Me | Ko Wai Ahau

Add the link to the About Me blog post here.

Keep connected with this blog